A constant reflection offered by someone when talking about Jim Galipeau is his fun-loving and kind personality.  Many flash a smile and laugh as they recall the tales and stories of Jim at board retreats on Salmon Lake Lodge, “the island”, or AICPA Council trips. Jim has a glowing personality the size of this state, and we are honored to present him as the 2018 George D. Anderson Award Recipient.

Jim is the youngest of seven (with 5 brothers and 1 sister).  His parents, Joe and Lorna, who’ve been married for 67 years, instilled the values of working hard, sharing, and giving back during Jim’s early years. As Jim recalls, “We grew up in a big catholic family, and were always running around, camping and doing chores.” His older brothers, as Jim lovingly referred to as “the pack”, kept him on his toes and made sure to give the baby, Jim, a few brotherly, hard times over the years as his right of passage.  Joe, Jim’s father, always worked as a manager, but was a salesman at heart.  This is likely where Jim learned how to relate and talk to people so well.

The Galipeau family moved around the country due to Jim’s father’s work. So, though Jim was born in Oregon, his family moved to Spokane when he was 2. From Spokane the family then moved to Missoula, where they spent 12 years before moving again, when Jim was 16, to Salt Lake where he graduated high school and attended one year at University of Utah.  After Salt Lake, the family moved to Seattle and in June of 1979, Jim went to Missoula to spend a week with his brother who was on leave from the Army. This week-long visit turned into an indefinite stay for Jim, as he found work at a saw mill and enrolled at University of Montana (“UM”) shortly thereafter. Missoula has been Jim’s home ever since.

Jim always thought he’d be a business owner, but after pursuing an opportunity at a furniture store in Missoula in search of an accounting intern, he decided that accounting would be his focus. It was his sophomore year at UM and the store owner typically only hired juniors so Jim used his powers of persuasion and talked him into giving him the job and the rest, as they say, is history! Jim then graduated from UM in 1984 and started at JCCS shortly thereafter.

Jim has been involved with numerous clubs, nonprofits and associations in Missoula, throughout Montana and Nationally.  He’s very dedicated to his community and served as a past president and is the current Treasurer for Destination Missoula.  Jim served as a board member and treasurer for the Missoula Downtown Association, as well as an accounting advisor for the following nonprofits: United Way, Humane Society of Western Montana, MonTECH, Missoula Economic Partnership and Missoula Parking Commission.  He is also involved with the University of Montana and sits on the Accounting Advisory Board.  Not to mention his dedication the Montana Society of CPAs (board member, Treasurer, Past President and Ex-officio 3 times) and his service as the AICPA Council Representative for Montana.

While Jim is known for his hard work and dedication to the profession, his family is the center of who he is and his biggest joy.  He loves to talk about traveling with his wife, Jackie, to Flathead lake, Cabo, Puerto Vallarta, Belize, Costa Rica, basically anywhere with water and a beach!  You can see Jim light up when talking about his daughters, Amy and Lindsey, and the great fun he had watching them play traveling softball around the state. And now he’s excited to be back in the swing of more softball with Brylee, his stepdaughter, as he and Jackie are gearing up to watch her play on a traveling team this summer after finishing her high school season last month. 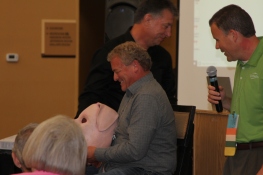 Jim met Jackie during a chance encounter during a meet and greet event for Destination Missoula, that JCCS was hosting.  A mutual friend convinced Jackie to stop by the event and Jim was greeting everyone as they came in the door.  They had lots to talk about between kids, softball and their professional work.  Jackie, a mortgage loan officer with Homes for Heroes, invited Jim to lunch the following week to discuss becoming an affiliate sponsor.  Jim fondly recalls that, “Once I got to lunch and started vising with her, I saw her in a whole new way. I sent her an email as soon as I got back to the office to ask her out.” They had a double date at a nonprofit event, that ended up just being the two of them, where they visited for hours. They have been together ever since.

It’s no surprise that Jim’s favorite part of being a CPA is his clients. He loves working with people and “becoming a part of their business and lives”.  As Jim states, “They start as clients and are now friends.”  The same sentiment rings true for Jim’s friendships with fellow co-workers as he has “made a lot of close friends over the years” among his fellow employees.  Jim’s passionate about people and the interest he takes in listening and learning about them and their business is undoubtedly why he’s been so successful and is a trusted adviser to so many. 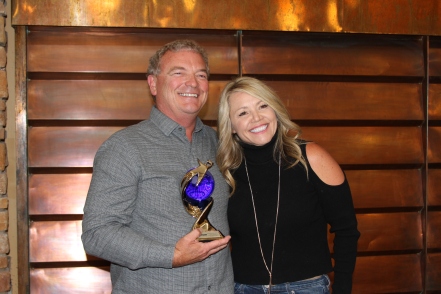 Jim with his wife, Jackie.

When asked where Jim sees himself in 5 years, his response with a laugh is, “hopefully a beach!”  His love of traveling with Jackie has Jim’s sights set on the future and he admits that he’s “been preparing for retirement a long time.”  We at the Society couldn’t think of a better plan and can’t thank you enough for the legacy you’ve created at the Society and all the people you’ve impacted. Thanks for being such a strong leader in the profession and congratulations on being this year’s George D. Anderson Award winner!