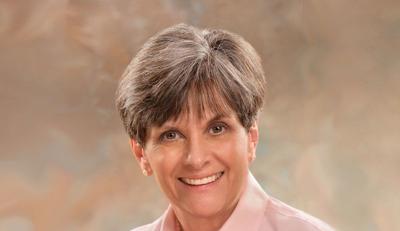 It’s an absolute honor to announce our 2020 George D. Anderson Distinguished Service Award Winner, Marilyn Bartlett!  Marilyn has an incredible story and we are excited to share some of her accomplishments and the work she has done.  She is inspiring, dedicated to the profession and has an amazing sense of humor that draws everyone who meets her in.

Marilyn grew up in Nevada and watched her mother drive 90 miles a day in her 1952 Dodge with no air conditioning to get her teaching degree.  This set the stage for Marilyn and she followed in her mother’s footsteps. She has had an amazing career where she worked hard and pushed through obstacles to get to where she is today.  If Marilyn commits, she follows through and gets the job done.

Marilyn started her career in education and found that it wasn’t the right fit for her. She graduated from University of Reno in 1972 and then roughly ten years after that she started taking accounting classes at MSU- Billings. In 1986 she sat for the CPA Exam.  She still gets chills when she thinks about opening the letter and learning she had passed the exam!  Marilyn started her accounting career working for the Montana Power Company in Colstrip, as a staff accountant for the Colstrip power plants.   She then moved to Butte with  Montana Power, and continued working in  the mining industry for several years doing manufacturing cost accounting. Marilyn moved onto being a Controller at Anderson ZurMuehlen.  Her next step in her career was at BCBS and she was introduced to the healthcare and insurance/pharmacy industry. Marilyn then moved to EBMS, a third-party administrator for employer self-funded  health plans. At this point, she was eyeing retirement, but the State of Montana needed her more!  At 64, Marilyn started working at the State. The State’s healthcare plan was going to be bankrupt by the end of 2017. She was given 2 years to turn the plan around. Guess what? SHE DID IT!  She dug deep, followed the money and has become known nationally as a consultant to help other states do the same.  By the time she was finished cleaning up the mess, the state had $112 MILLION in reserves and was loaning money to the State’s general fund.

Marilyn is still actively working as a consultant part time from home. She has testified in Washington DC in front of senate committees. Marilyn has learned and watched the difficulties of the political games and how frustrating it is to see bills watered down or not pass at all. However, in true Marilyn fashion, she keeps pushing on and connecting the dots and providing data to help move things forward. One thing she remains humble about, is her recent recognition in Fortune Magazine as #13 of 50 of the World’s Greatest Leaders.

When reflecting about the CPA profession, Marilyn talked about how honorable of a profession it is and she has held her ethical responsibility so highly, that it even hurt her at times in her career. She’s proud of that too.

How dedicated can one be to the profession you might ask? Marilyn named her dog FASB! She, her husband Ed and FASB, enjoy hiking in Missoula and being with family and friends. Marilyn and Ed love taking their grandchildren on trips of their choosing. She laughed and recounted taking Libby to Disneyworld, Perry on a Disney Cruise in the Bahamas and Vinnie has shown interest in  a Steelers and Red Socks game.  Her greatest joy is her family and friends.

When you hear the song “It’s a Wonderful World”, smile and think of Marilyn.  She said this is one of her favorite songs and it seems so fitting. It’s people like Marilyn that make the world so wonderful by finding humor and lightness whenever possible and dedicating their life to their profession and others. Thank you so much Marilyn.  You are truly an inspiration and a deserving recipient of the Distinguished Service Award. Congratulations!